Try to google “what motivates employees“, and you can spend the rest of your days figuring this mystery out, browsing through thousands of results.

A short but comprehensive summary is found on Science Direct. You get the overview and information on what you read on next, if you want to go deeper into the subject.

In this post, I briefly address Maslow’s hierarchy of needs, as it’s the most popular human motivation theory; then I look into Csikszentmihalyi’s Flow, another idea that is extensively discussed about, sometimes without credit being given to the author (is it the too-long name perhaps? 🙂 ); I continue with Daniel Pink’s Drive book is on the reading list of all proper Scrum training and builds on Flow; I end up looking into healthy and motivated teams with Patrick Lencioni and Tom DeMarco. Stick with me, or jump to the videos and the summary (TL;DR) at the end.

According to Maslow (1943), humans have five levels of needs: basic (physiological and safety), psychological (social, ego) and self-actualisation.

The pyramid visual is essential, as individuals have to reasonably satisfy one level of needs before moving towards the next level. A man’s need for love, status, recognition are nonexistent if he is not well fed. Similarly, if a person feels threatened, they will primarily need security, protection, and will be unwilling to take any risks.

The social needs of humans are very strong, yet organisations don’t encourage groups, they see it as a threat. Fortunately this is changing in new organisations, where friendships or a “family” environment is encouraged.

The esteem needs are rarely satisfied, men will indefinitely look for higher satisfaction of these, and they are only looked into when all of the lower needs are reasonably satisfied.

Finally, the self-actualisation need refers to realising one’s own potential, continuous personal development and growth. Only at this level we can adress the topic of highly motivated, high performance individuals and teams.

When an individual has all his other needs reasonably satisfied, more rewards in those areas will not equal in more motivation, so extrinsic motivation is not long-lived, nor is it scalable (we’ll discuss more about this with Daniel Pink). Also, an important distinction needs to be made between satisfied needs and motivation: a satisfied need is not a motivator of behaviour.

Flow is “a sense that one’s skills are adequate to cope with the challenges at hand, in a goal-directed, rule-bound action system that provides clear clues as to how well one is performing. Concentration is so intense that there is no attention left over to think about anything irrelevant, or to worry about problems. Self-consciousness disappears, and the sense of time becomes distorted. An activity that produces such experiences is so gratifying that people are willing to do it for its own sake, with little concern for what they will get out of it, even when it is difficult, or dangerous.” excerpt from “Flow. The Psychology of Optimal Experience“.

The below image, from Csikszentmihalyi’s book, shows a boy, Alex (A) in four states of mind while playing tennis:

Csikszentmihalyi considers that happiness is intrinsic, not extrinsic, and it can be increased from creating more situations when you find yourself in the flow. A person who is in a state of flow while working won’t distinguish between work and free time, as they both will bring him immense satisfaction.

Listen to his TED talk below, and if you’re passionate about the subject, you can also read his book – Flow. The Psychology of Optimal Experience.

Daniel Pink is one of the authors that said it bluntly: rewards don’t motivate people. But before even getting into rewards, individuals must have “baseline rewards” (that are adequate and equitable), otherwise a person will have very little motivation.

His theory is that you can’t get the best out of your employees anymore by rewarding them with lavish compensations. On the contrary, rewarding an activity that used to be done because of intrinsic motivation, will make people spend less time on the work and show less interest for it. They will expect that reward, and the effect of it wears off after a while, so you need to create more rewards to get results; you just created extrinsic motivation.

“The best use of money as a motivator is to pay people enough to take the issue of money off the table: Pay people enough so that they’re not thinking about money and they’re thinking about the work. Once you do that, it turns out there are three factors that the science shows lead to better performance, not to mention personal satisfaction: autonomy, mastery, and purpose.”

If Drive stirs your curiosity and the videos here are not enough, you can read Pink’s book also.

I’m going to move away from the realm of individual motivation to team performance. The topic is very broad (and I will write another blog post especially for this), and I’d like to bring into discussion two authors that are a must read for an Agile manager: Patrick Lencioni shows that teams that bicker and debate are healthy teams (and the opposite, a calm team that never argues hides a highly dysfunctional team), while Tom DeMarco and Timothy Lister talk about what software development teams need for high performance.

As Lencioni himself mentions in the video below, his model of strong teams is so simple that you’ll probably think “but I know all this, what else is new?“, yet it’s one of the most practical books on building high performance teams one can find.

Working with big companies and CEOs, Lencioni discovered two critical truths: (1) genuine teamwork in organisations remains as elusive as it has ever been; (2) organisations fail to achieve teamwork because they unknowingly fall prey to five natural but dangerous pitfalls, which he called five dysfunctions of a team (from Patrick Lencioni, The Five Dysfunctions of a Team. A Leadership Fable, 2002): 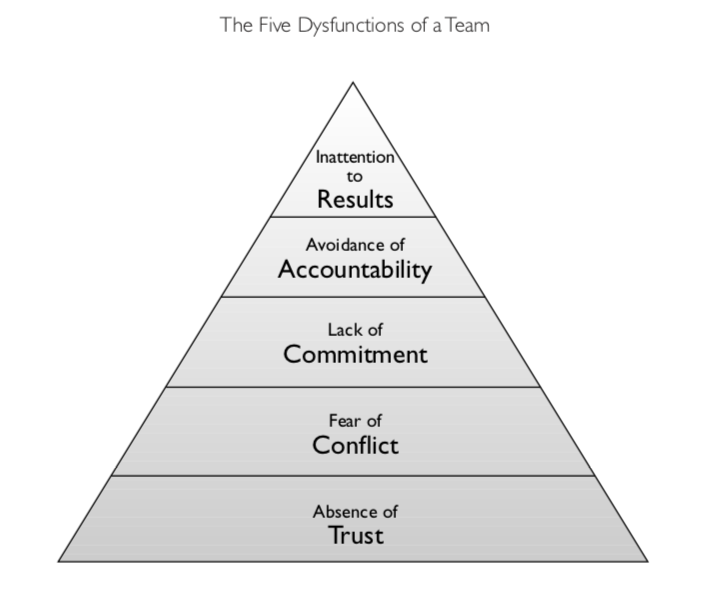 You have to identify these dysfunctions in your team – Lencioni has an assessment included in the book for this – and work with the team to overcome them (from training, workshops, to even firing individuals that are an impediment to building a strong team).

Peopleware. Productive Projects and Teams,  Tom DeMarco and Timothy Lister, is a work of art and deserves a full blog post on its own. My intention here is to extract characteristics of high performance teams according to these two esteemed authors. I highly recommend you read this book if you work in software development in particular; if you are to choose only one book from this blog post, make it this one.

TL; DR: So, how do you create an environment of highly motivated employees?

3 thoughts on “Intrinsic Motivation is the Drive for Extraordinary Results”